I found this article on the site of the Future Symphony Institute... wholeheartedly recommended: 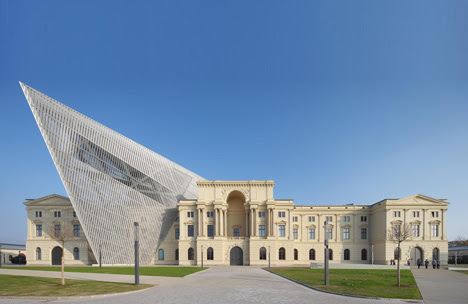 The Fear of Backwardness

"Modernism in architecture and music is very much like the artificial invention of a language, like Esperanto. Esperanto was used by tradesmen and by a very small number of people. But imagine that a very powerful political group took over not just a province or a country, or even a continent, but over the world and imposed Esperanto as a single language, forbidding all other languages and declaring them as purely historical – no longer valid, no longer legitimate for use today. That is what has happened to architecture and even to music."

The photo shows the museum of military history in Dresden, with an extension by Daniel Libeskind. The idea is, to demonstrate that 'military' is not just a subject like any other, but a painful intrusion into harmonious life, and especially so in Germany, of course. On paper, this idea seems entirely justified, it is a typical example of concept architecture where the idea is all that counts, and apparently not the aesthetics of the result. The reality of such ideas is quite another matter - and this 'extension' is merely ridiculous: an in itself beautiful traditional building is being damaged by an immense ax. In spite of the theoretical justification of the concept, developed at the designers' table, the result demonstrates the violent contempt of contemporary architecture for the achievements of the past, and the need to draw attention to the contemporary architect with an aggressive scream. Also, the extension is not architecture at all but 'object building', the blown-up construction of some functional instrument, indeed like an ax or knife, something utterly violent. It looks like a concert programme with Beethoven and Mahler, interrupted by a piece by Xenakis.

Modernism is a mental field transcending genre: it is a state of mind.

Interesting article about research of the influence of modernist architecture on the people forced to live in and around it:

Sometimes it takes long, very long, before the obvious is noticed.

Apart from conditioning, cultural traditions also train the mind, the heart, the ears and the eyes to spot the elements which threaten human civilization. In this sense, the past is a fundamental learning trajectory. As Cicero said: 'To be ignorant of what occurred before you were born, is to remain always a child."

Posted by The Subterranean Review at 04:39